Piotr :) I'ts me
I would like to share with you the knowledge about my "hug the old equipment", about interesting accessories, components and parts of computers. These things are mostly "legal age" that are over eighteen years and in computer technology are now history.

The idea of "hugging the grata" is wide and certainly goes beyond my gaming room, which is why I also joined "Brother Lumber". He has some postcards, books, stamps, etc., some old things. Often older than my patios, but they are also worth hugging. I think that everyone should have at least one "cuddly trash". A souvenir received from parents, preserved from childhood, or something related to our hobby or interests. It is not about creating museums, but about a piece of the corner, shelves for one thing, which one day you can pass on :)

For a long time I was wondering how to present my interests. Originally, it was supposed to be a page about my old laptops. There was a bit of them :) Now there will be a page about those saved from oblivion, about "cuddled things". 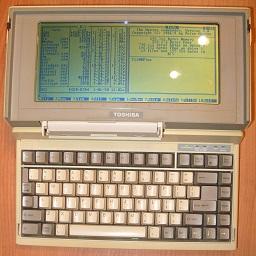 I left three, four ... interesting copies. All are of age :) All work. I try to run them often to keep them in working order.
In addition to these laptops, I have some old MegaBytes 2.5 "and 3.5" SEAGATE, CONNER, MAXTOR, JVS, IBM, QUANTUM, HITACHI and 5.25 "SEAGATE ST-251 disks. I have some PCMCIA cards - GSM modems, USB cards , SD and MMC adapters, disks, for connecting CD drives and multi and etc.
I have stopped the Altec Lansing Multi MEDIA box and a pair of laptops for technical work COMPAQ Contura 4 / 25c (Series 2820E), COMPAQ ARMADA 1130T ( Series 2860F) and GATEWAY SOLO 3500. The PC Pentium II has been used to check old disks and DOS software, it has now been replaced by PC486 in a classic box that opens upwards. :) In addition, the shelves went on the original media DOS'y and Windows 3.x, NT, 9x.
I'm going to bring the collected pact knowledge to the site:
- how to prepare system disks with DOS,
- how to check the old laptop and how I got to its center.

My practical knowledge dates back to the mid-1980s. My first computer was Sinclair ZX-81, which I sold in the original box when I bought another ZX-81 with an additional 16kB of memory and image inversion switch. It has been in a slightly improved version until today.
The next was Sinclair ZX Spectrum and after that in the early 90's the first own PC AT with a 16MHz processor from OPTIMUS. I worked on 8-bit IMP85 with 20MB hard drive and 8 "floppy disks. Operating system CP / M and CP / M +. These were computers :)
I dreamed about the laptop similar to T1100Plus seen in the commission and maybe that's why now such "lumber" was on my shelf :)