There are appliances, witch I had in possession. I made their photographic documentation so you can see. 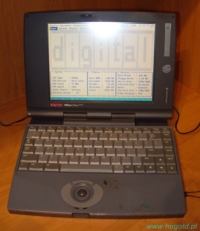 Status:
With Windows 95 he managed. Matrix - vertical stripes, the potentiometer reacted to adjustments, hinges on the breakaway grenade. The battery is not known because the socket with the battery contacts was damaged.
The hard disk is missing but has a grommet. The disk went to another laptop :)
In FDD, the drive belt fell and the station did not read floppy disks. The keyboard - all the keys were. It should be functional.
I did not have a power supply. I have connected the 12V power supply alternately with two pins. In the picture, the black arrow pin plus, the black pin minus is marked.


Useful (I was here and checked)::